The Baby Boom horde is generally considered to have come squawking into this plane of existence between 1946 and 1964.

Some researchers insert a Generation Jones into that period.

The Disgruntled Old One, the Coot; that’s me!!!  has noticed an increasing number of anti-Baby Boomer comments upon the Web at many different and types of Web sites.

Many of these anti-Boomer comments specifically attack at how those damnable Baby Boomers are directly responsible for today’s economic woes.

Believe what you want, it means little to nothing to me.

However, I believe the anti-Boomer tirades are based upon faulty logic and the typical severe lack of education or any personal research conducted about the topic.

In other words, just the typical spewing of knee-jerk rhetoric by ALL USA societal members, Boomers included when that cohort spews their blather.

Here is an Official Coot Comment left upon a message board:

Served during the “Kill a Commie for Mommy era.”

A Baby Boomer who now constantly reads at message boards across the Web the Boomers are mainly or largely responsible for the woes confronting the USA today.

From what I observe and read those post-Boomers better beware even us aging Boomers since many of us labored as working-poor for decades performing those tasks the elite class pukes proclaim relentlessly that USA citizens will not perform.

When, if ever, I can retire I will need to stake out higher-class dumpsters to acquire foodstuffs.

With decades of acquired brawn and biting/gouging acumen acquired from a rough and tumble life at the bottom of the socio-economic hierarchy I will be a formidable, even deadly opponent in the fight for tossed-out food.

You have been warned.

Beware the fangs of a generation not nearly as coddled as you post-Boomers.

I wonder how many of today’s recruits could have handled the boot camp-types us Boomers survived, which was, admittedly, not as harsh of the boot camps prior to our Cold War era. 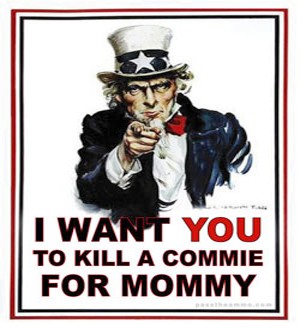 I thought it was rather kind of me to warn the human herd to beware my hungry Cootness when I was dumpster diving for grub.

I can envision pit bull-like behavior from me if others attempt to retrieve food from MY dumpster.