In my younger days when I could consume massive quantities I shunned a couple meals and entered the all-you-can-eat Chinese buffet in Concord, California.

It was either the 5th or 6th plate when the three Chinese cooks, escorted by the Chinese waitress/cashier, arrived at my table and commenced staring at me. 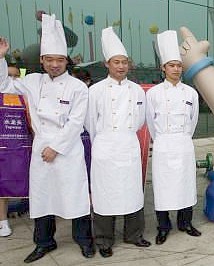 Of course I had to arise and return the bows.

After that event ran its course the trio, chattering merrily in one of the Chinese dialects returned to their kitchen duties.

I asked the English-speaking gal what that was about.

She told me that first, they were amazed at how much I could shovel in and next, that they considered it a compliment that I was eating such a large amount.

I made some folks happy.

So I did make an extra effort and ate until it was physically impossible to eat any more.

I slept for a lengthy time in the recliner…. so stuffed I doubt if I could have slept unless I was in a semi-upright position.

/ a slashie for those expecting one.