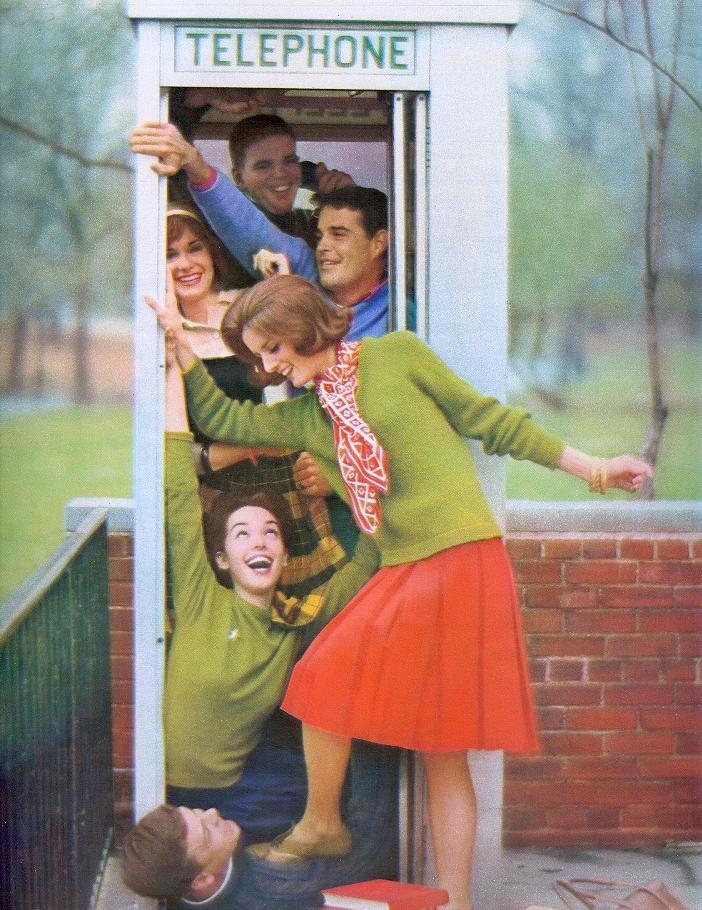 How many folks can fit into a phone booth?

“The fad continued to gain steam with students skipping classes to plan their phone booth stuffing event. Some phone booth stuffers dieted beforehand and some worked on various stacking techniques (such as the “crosshatch” stacking method that was used to set the St. Mary’s College record).

As quickly as the fad took off, it disappeared, ending in the summer of 1959. The South African record of twenty five people stuffed into a booth has never been broken.” 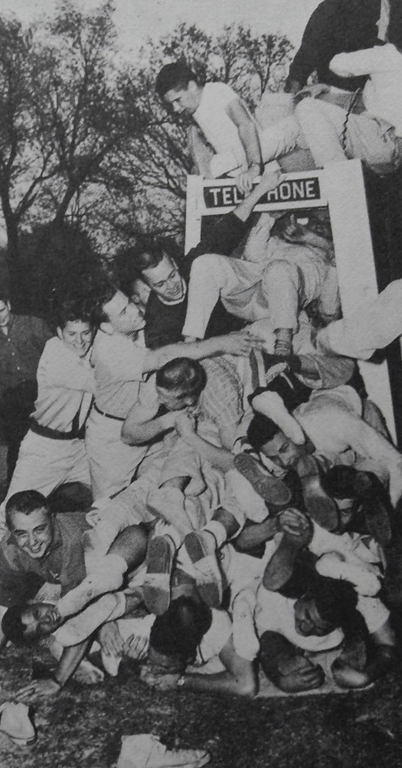 If the younguns’ today wanted to emulate a fad from the past there would be no problem if they swallowed goldfish… there are plenty of goldfish around. If that baneful political correctness infesting/infecting is ignored there are more females than ever filling the colleges so a panty raid should provide a fruitful bounty of dainty undergarments.

Awhile back I wandered the town seeking a pay-phone. My landline was dead and I needed to call ATT to inform those folks. No cell phone and I avoid my neighbors and this was not a life-or-death emergency so off I went. I looked inside convenience stores. Pay phones used to be common there. No more. No outside phone booths anywhere. None in the grocery stores. I asked folks as I wandered and no one could recall seeing a pay phone anywhere. A couple hours of intensive searching and asking and I got a tip. One convenience store abutting the bad part of town had an inside pay phone. Off I went and lo!!! There it was in all its archaic glory. A wall-mounted pay phone. No way to see how many people you could stuff into that thing.

If the kids, students, whatever wanted to attempt to break that old world record would they ever have the opportunity to do so? Where would they find a phone booth? Would they recognize it if they saw it?

WHOAA!!!!  Amazing!!! With some help from decrepit old codgers who know what a real phone booth is some college folks piled into a phone booth and here’s the proof:

It would take some effort and may have to be rented from a prop-supply firm or other place but phone booth stuffing can apparently still be done. I wonder how the Superman media folks are going to handle the lack of phone booths? What would be a suitable replacement? Dumpsters were a rarity when phone booths were everywhere but now those are the common device. Superman using dumpsters is not very romantic but a guy’s gotta’ do what he’s gotta’ do!!!